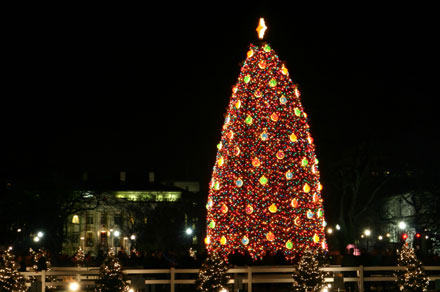 The following is a press release from the National Park Foundation:

This year, the National Christmas Tree Lighting Ceremony takes place on November 28. Free tickets will be awarded through an online lottery, which opens at 10 a.m. EDT on October 18 and closes at 10 a.m. EDT on October 22. To enter the lottery visit www.recreation.gov and click the ‘TICKET LOTTERY’ link. Those without computer access may call 877-444-6777 to enter the lottery. Lottery winners will be notified on October 29.

This year marks the 96th annual National Christmas Tree Lighting, first celebrated in 1923 by President Calvin Coolidge. The ceremony today inspires visitors and viewers from around the globe to #FindYourPark/#EncuentraTuParque during the holiday season. The National Christmas Tree is a living Colorado blue spruce from Virginia, which can be seen year-round in President’s Park. Fifty-six smaller trees surrounding the National Christmas Tree will feature one-of-a-kind ornaments, representing every U.S. state, territory and the District of Columbia.

ABOUT THE NATIONAL PARK SERVICE
More than 20,000 National Park Service employees care for America’s 417 national parks and work with communities across the nation to help preserve local history and create close-to-home recreational opportunities. The National Park Service has cared for the White House and its grounds since 1933. President’s Park, which includes the Ellipse and Lafayette Park, was officially included in the national park system in 1961. Visit us at: www.nps.gov, on Facebook: www.facebook.com/nationalparkservice, Twitter: www.twitter.com/natlparkservice, and YouTube: www.youtube.com/nationalparkservice.

For more information about this event, visit our National Christmas Tree Lighting page.