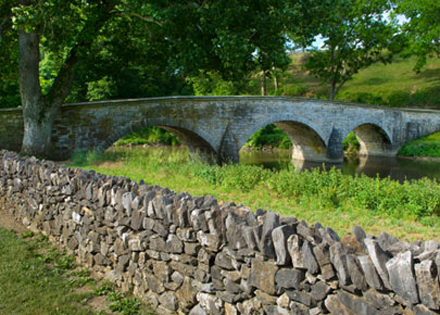 On September 17, 1862, Confederate forces sought to seize Washington, D.C., and at the same time prevent Union troops from entering Virginia. General Robert E. Lee’s assault posed the first real threat to the nation’s capital. He was faced by Union forces under General George B. McClellan at Antietam, Maryland, on an historic battlefield about a 90-minute drive from Washington.

McClellan, despite having discovered Lee’s plans, delayed his attack. The lag time allowed the Confederates to convene with General Thomas J. “Stonewall” Jackson’s troops. They were still outnumbered, however, and within 12 hours, Confederate forces retreated. Union victory was bittersweet — they lost even more men than the Confederates.

With 23,000 killed, wounded, missing, or captured, the Battle of Antietam was the bloodiest single day of combat in the Civil War. The gruesome battle served as a catalyst for President Abraham Lincoln to issue his preliminary Emancipation Proclamation, the first major step towards freeing the slaves in the South.

A daytrip to the Antietam National Battlefield is a perfect way to immerse yourself in our nation’s rich history. Drive, bike, or walk through the battlefield to see where the armies met. At the Visitor Center, learn from exhibits, an observation room, films about the battle, talks by park rangers, and a museum store. Visit the new Pry House Field Hospital Museum, once General McClellan’s headquarters and today a showcase of medical techniques used during the Civil War.

here are many different ways to experience Antietam National Battlefield. The Visitor Center sells CDs and audiotapes for the 8 ½ mile, 11-stop self-guided road tour. You can drive it or go by bicycle or on foot. Antietam Battlefield Guides provides a professional tour guide service. Rates depend on group size and tour length, as shown on their website. For hikers on one of the shorter trails, printable trail guides are available online.