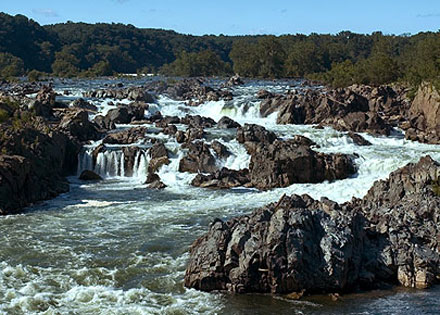 Just north of Washington, D.C., the Potomac River is forced into narrow Mather Gorge, where it crashes over the rocks of Great Falls. It’s a spectacular sight — but it was a major frustration to George Washington because the falls blocked boat travel up the Potomac.

Washington dreamed of making the river navigable all the way up to its headwaters, to facilitate trade between the Appalachians and the Ohio River Valley. He formed the Patowmack Company to construct a series of canals and locks to lift boats around the falls. Later the Patowmack canal was replaced by an even more ambitious venture, the Chesapeake and Ohio Canal, on the other side of the river.

Today, at Great Falls Park, you can visit the remains of the Patowmack Canal and the little town of Matildaville that flourished alongside it in the early part of the 19th century. You can also get great views of the falls from three separate overlooks, or go biking, hiking, or birdwatching along the trails. In fact, Great Falls is one of the best places in the region to spot nesting bald eagles.

If you’re feeling adventurous, sign up for one of the whitewater rafting trips run by Outdoor Excursions. You won’t go over the falls, but the ride just below them is plenty bumpy.

For the slightly less adventurous, there are ranger-led nature and historical walks offered almost every day. Check the full schedule at the park’s web site: www.nps.gov/grfa/index.htm.