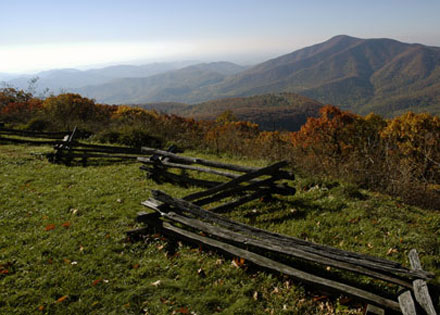 A two-hour drive from Washington, D.C. will take you up to the spine of the Blue Ridge Mountains. That’s where you’ll find the sprawling forest of Shenandoah National Park.

It’s a beautiful place with magnificent views of tree-filled valleys, especially stunning in the fall. Although it’s a mere 75 miles from the heart of the city, nearly 40 percent of its 196,000 acres have been officially designated as wilderness by Congress — “an area where the earth and its community of life are untrammeled by man, where man himself is a visitor who does not remain.”

The easiest way to see Shenandoah, at least in passing, is from Skyline Drive, which winds along mountain crests for more than100 miles, right down the middle of the park. Pull off at one of 75 overlooks to take pictures or enjoy the wildflowers that bloom through spring and summer.

You can also hike a portion of the Appalachian Trail, which runs along Shenandoah’s main axis, or hike on the park’s 400 other miles of trails. (Visit www.nps.gov/shen/planyourvisit/maps.htm for trail maps.) If you want to plan a multiday hike you’ll need a backcountry camping permit (visit www.nps.gov/shen/planyourvisit/campbc_permit.htm for more).

Shenandoah is home to more than 200 bird species. More than half are known to breed in the park, including 18 species of warblers (notably the declining Cerulean and Blackburnian warblers) and in recent years a pair of peregrine falcons. You also might run into deer, foxes, or any of the 50 other mammals that make the park home.

The rangers at Shenandoah lead nature walks and give presentations about the park and its wildlife every day of the week. Find a schedule at www.nps.gov/shen/planyourvisit/rangerprograms.htm.