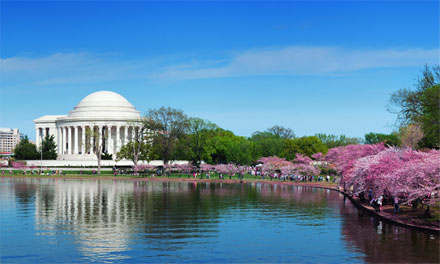 Other towns rely on robins or melting snow to tell them when spring has truly arrived. Washington, D.C. has cherry blossoms. Each year at the end of March or the beginning of April, the whole of the Tidal Basin gets a pink-and-white coating as the thousands of cherry trees ringing the water all bloom at once. Hundreds of thousands of people come to see the spectacle.

The trees first arrived at the Tidal Basin in 1912 as a gift from the people of Japan to the people of the United States. It’s only fitting, then, that the two-week National Cherry Blossom Festival has a distinctly Japanese flavor. The Japanese embassy shows Japanese movies and displays traditional art. The National Sushi Society holds a sake and sushi tasting. The Smithsonian sponsors a kite festival on the mall. It all peaks in a massive Japanese street fair featuring martial arts demonstrations, origami, koto players and rock bands, food from 20 different restaurants, sake, beer, and much more. There’s even a parade running down Constitution Avenue.

The Cherry Blossom Festival offers plenty of non-culturally-aligned events too. There are paddleboat rides, bike rides, and photo safaris; river cruises and guided tours; a soccer tournament, a rugby tournament, and a regatta. In short, the festival is Washington, D.C.’s excuse to get back outdoors after a long cold winter.

The 2022 National Cherry Blossom Festival in Washington DC is scheduled for March 20 through April 17, with the Parade on Saturday, April 9. Dates and schedule of events are subject to change. 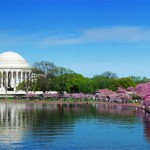 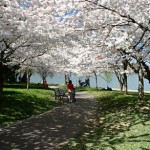 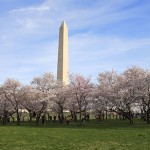