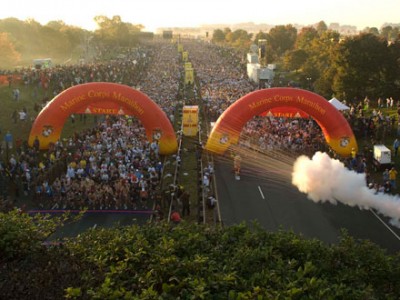 Each year in late October, more than 30,000 people pound along the pavements of Washington, D.C. and Arlington, Virginia, up one bank of the Potomac and back down the other, for the Marine Corps Marathon. That number makes the event the fifth-largest marathon in the country and the tenth-largest in the world. Unlike the others, though, it offers no prize money and therefore attracts no or very few professional runners–so amateurs can and do win. In 2008, for example, the men’s and women’s titles were both taken by first-time marathoners.

If you want to run in the event, you need to plan for it early. Registration opens at the end of March and the race sells out quickly. It’s much easier to join the 150,000 spectators: just station yourself anywhere along the way. The race starts at Route 110 in Arlington, then makes a four-mile circuit through neighboring Rosslyn before returning to the Potomac and crossing the Key Bridge into Georgetown. It follows the C&O Canal upriver, then loops back around the Georgetown Reservoir and descends with the river all the way to Hains Point in East Potomac Park. Then it’s back up to the Jefferson Memorial, around the Tidal Basin to the Lincoln Memorial, and around the National Mall, all the way to the Capitol and back as far as the Washington Monument. There the course turns south, recrosses the Potomac over the 14th Street Bridge, and finishes with a few turns through Crystal City.

All along the course you can see live music, mostly high school marching bands, with a few bluegrass and percussion acts mixed in. In the days before the race, visit the Marine Corps Marathon Health and Fitness Expo to see over 200 vendors of running gear, food, and other merchandise—and to belly up to the Experts Bar, where sports medicine doctors and other running experts dispense advice in two-hour shifts.