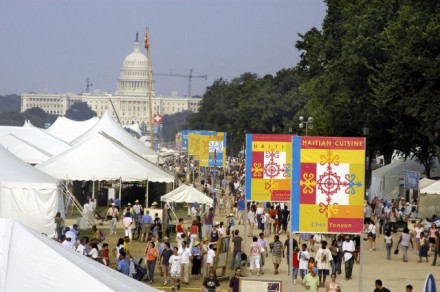 If you’re in Washington, D.C. during the two weeks bracketing the Fourth of July, you won’t want to miss the music, crafts, and food showcased at the Smithsonian Folklife Festival. Launched in 1967, the festival invites practitioners of folk traditions from across the country and around the world to the National Mall to demonstrate and discuss folk arts native to their regions. The festival is highly participatory–visitors are encouraged to dance, sing and interact with speakers–and has a loyal following among Washingtonians and tourists alike. More than one million people attend each year.

Don’t miss the special concerts/dance parties offered at the end of each festival day; the Marketplace, inside the National Museum of the Native American Indian, where you can buy crafts and CDs by festival artisans; and the food concessions, which feature special dishes related to the festival’s themes.

The number and variety of programs offered in the course of one day at the festival can be dizzying. Visit www.festival.si.edu before you go and review the full schedule of events to plan your day (schedules are subject to change day-to-day). When you’re there, don’t be afraid to ask lots of questions. Most of the festival participants  are eager to talk about their folk traditions.