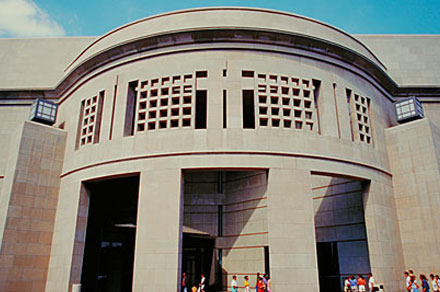 It’s a somber period, one that bears memorializing. The U.S. Holocaust Memorial Museum, which opened just off the National Mall in 1993, is America’s leading center for the study and documentation of the Holocaust — the genocide and persecution of more than six million Jews, Gypsies, Poles, political dissidents, and other minority groups by Nazi Germany in the 1930s and 40s.

The three-floor permanent exhibition tells the history of the Holocaust through artifacts, films, photographs and eyewitness testimonies. Visitors can view a railcar that transported Holocaust victims to a German concentration camp imposed on occupied Poland, and the personal effects of those who perished, including shoes, identification cards, and suitcases.

Because touring the museum can be a wrenching experience, the museum recommends the permanent exhibition for visitors 11 years and older. A separate exhibition on the museum’s first floor, Remember the Children: Daniel’s Story, tells the history of the Holocaust through the eyes of a young boy living in Nazi Germany. It is recommended for visitors 8 and older.

A Hall of Remembrance on the second floor holds an eternal flame; it serves as a national memorial to victims of the Holocaust.