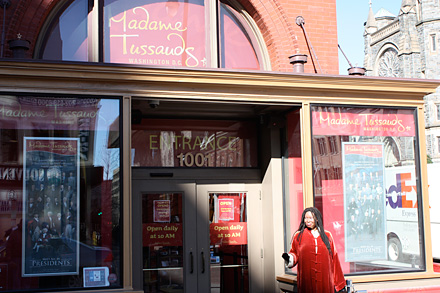 Not surprisingly, you’ll find the Washington, D.C., outpost of Madame Tussauds Wax Museum heavy on political figures. Barack Obama, Bill Clinton, Ronald Reagan, and former D.C. Mayor Marion Barry are all represented, along with a healthy mix of musicians and sports stars, from Madonna to Tiger Woods. The museum also includes a wax likeness of Michelle Obama, looking every bit the first lady in a red dress and pearls. She stands next to her husband in front of a White House mural — perfectly positioned for a presidential photo op.

Madame Tussauds Washington, D.C., is one of nine museums worldwide that offer visitors the chance to get up close and personal with wax figures of the famous and infamous. French sculptor Marie Tussaud created her first wax model, a depiction of Voltaire, in 1777, and later opened a museum in London that included a popular “Chamber of Horrors,” depicting victims of the French Revolution. Today, one of the chain’s most controversial figures is the likeness of Adolf Hitler featured at the Berlin museum; the statue has been repeatedly vandalized.