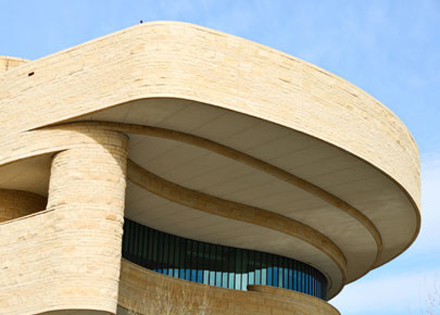 The National Museum of the American Indian has one of the most extensive collections of Native American arts and artifacts in the world, covering 12,000 years of history and more than 1,200 cultures indigenous to the United States, Canada, Central and South America, and the Caribbean. The museum’s more than 800,000 artifacts, films, and photographs span the Paleo-Indian era to the present day.

Native American arts are among the highlights here — the tribal masks and headdresses, intricate beadwork, and gold and silver jewelry are stunning. You’ll also learn about the work of Indian code talkers who used their native languages to assist the U.S. military during World Wars I and II, and how Mohawk ironworkers helped build New York’s skyscrapers.

The museum is one of the best spots on the National Mall to hear music or see dance performances; Native American acts perform regularly in the light-filled, 120-foot high atrium or outdoor “welcome plaza” (check web site for schedule).

Opened in 2004, the museum is a new addition to the National Mall and is notable for its striking, curvilinear architecture. Constructed of sand-colored limestone, it is designed to evoke natural rock formations shaped by wind and water, and is surrounded by pools and marsh grasses. Several Native American architects served on the building’s design team.

The museum’s Mitsitam Café may be the best restaurant in the entire Smithsonian system; local food critics give it rave reviews. Adventurous eaters will enjoy the native foods menu, which currently features turtle chowder, cornmeal-crusted fired frog legs and juniper-glazed acorn squash (check web site for updated menus, which are seasonal). The café is open daily from 11 a.m. to 3 p.m., every day except Christmas Day (11 a.m. to 5 p.m. during peak season).