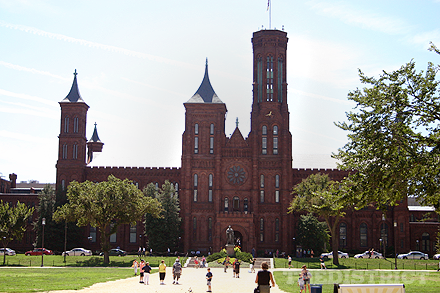 The Smithsonian Institution Building is one of the most easily recognized landmarks on the National Mall. Built in red sandstone, it approximates a 12th-century French fortress, earning it the nickname “The Castle.” It was the first Smithsonian building, completed in 1855 by the same architect who designed St. Patrick’s Cathedral in New York City, and it still houses the main administrative offices of the Smithsonian Institution itself.

Although the Castle housed a major exhibit hall up until the 1960s, today its permanent offerings for the public are limited. You’ll find the main visitor’s center for the Smithsonian here, with information desks, touch-screen computer guides, and a scale model of downtown Washington showing the location of all museums. The Castle also houses an exhibit of the works of four scientific illustrators who worked in the Smithsonian Institution Building between 1852 and 1898; a small display recounting the history of the building itself; the crypt of James Smithson, who originally endowed the Institution; and “The Smithsonian Institution: America’s Treasure Chest,” an exhibit displaying a sample of works from all the various museums.

When you need an escape from the bustle of the Mall, duck into the 4.2-acre Enid A. Haupt Garden, a carefully laid out complex of flower beds, urns, bushes, and trees. The garden is tucked behind the Castle and offers an island of green calm in the middle of the city—with free public wifi.