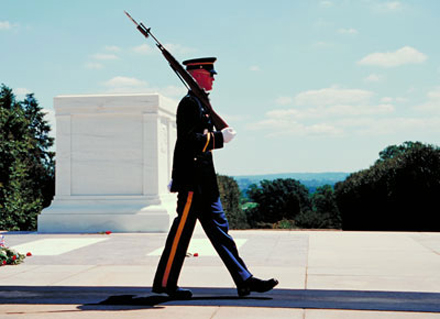 As you walk past the thousands of white headstones lining Arlington National Cemetery, don’t be surprised to hear “Taps” in the distance. The cemetery averages 28 funerals a day, honoring not only soldiers who have fallen recently in Iraq and Afghanistan, but many World War II and Vietnam veterans who have asked to be buried here. More than 300,000 people are interred on this 612-acre site in Arlington, VA, located just across the Potomac River from the Lincoln Memorial. They include the nation’s war dead and soldiers going back to the American Revolution, as well as 3,800 former slaves, whose graves are marked with the words “Citizen” or “Civilian.”

The Tomb of the Unknowns, where three servicemen are interred, is among the most visited sites at the cemetery and hosts presidential wreath-layings on Memorial and Veteran’s Days. The Tomb is guarded 24 hours a day, 365 days a year, by Tomb Guard sentinels, members of the elite 3rd U.S. Infantry. The guard changes every hour, on the hour, Oct. 1 to Mar. 31, in an elaborate ritual. From April 1 through Sept. 30, another change of the guard is added on the half hour.

The gravesite of President John F. Kennedy and Jacqueline Bouvier Kennedy Onassis, settled on a steep hillside below the Custis-Lee Mansion, is also worth a visit. Here, the Eternal Flame burns from the center of a circular granite stone; it was installed at the request of Mrs. Kennedy when the President was buried in November 1963. Robert Kennedy is also buried at the cemetery, as are the seven crew members of the U.S. Space Shuttle Challenger. A 40-acre cemetery expansion is currently under way; it is expected to make space available for burials through 2060.

Arlington National Cemetery offers a free shuttle service for individuals to visit a gravesite. For more on the cemetery, visit http://www.arlingtoncemetery.mil