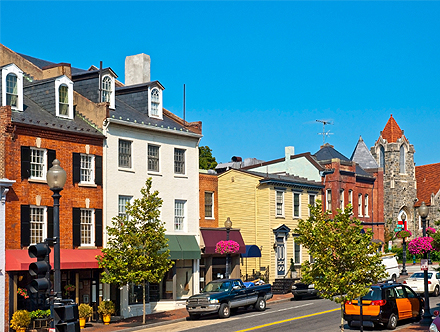 Georgetown was originally founded in 1751 as a tobacco-trading town, at the farthest upstream navigable point of the Potomac river, just below the Great Falls. In 1790 Congress approved the creation of a federal district—the District of Columbia—to contain the new nation’s capital, and Georgetown fell within that district’s borders, but it remained an autonomous town for nearly a hundred years after that, and wasn’t finally absorbed into a consolidated Washington, D.C. until 1871.

Today the neighborhood of Georgetown retains that obvious historic character. The homes are smaller there and older, the streets tree-lined and sometimes cobblestoned. The Old Stone House, the oldest known building in Washington, D.C. is there, and so are the downstream end of the picturesque C&O Canal, originally built to carry barges around the Great Falls; the beautiful gardens of Dumbarton Oaks Estate and Tudor Place; and the Oak Hill Cemetery, where many Civil War leaders are buried.

Because it was the only existing town in the early days, Georgetown became the District of Columbia’s center of social life and commerce, and remains so to this day. M Street and Wisconsin Avenue are lined with high-end fashion boutiques, furniture shops, jewelers, and art galleries. More can be found tucked inside The Shops At Georgetown Park, a mall on M Street, and dozens of restaurants too.

And because it was also a port, Georgetown has a gorgeous waterfront, at the southern end of which you’ll find the Washington Harbour complex, home to four different restaurants with outdoor, riverside seating.

Because it’s not directly on a Metro line, getting to Georgetown on public transportation means taking a bus. Your best bet is one of two DC Circulator routes: either get on the Dupont-Georgetown-Rosslyn line at the Dupont South or Rosslyn Metro station, or get off at Foggy Bottom (Blue/Orange Line) or Farragut North (Red Line) and walk a block to K Street to pick it up. The fare is $1. You can also walk from Foggy Bottom; it’s about 15 minutes.