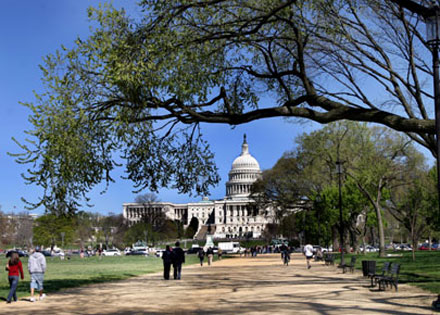 The National Mall, the broad swath of grass and trees that stretches nearly two miles from the Lincoln Memorial to the steps of the Capitol, was the central axis of Pierre L’Enfant’s original plan for Washington, D.C. For over a hundred years, though, it was left as a bare strip of ground; during the Civil War, the Union army camped here. In the early 20th century, it was at last developed into a grand park, and came to be known as “America’s front lawn.”

More than 24 million people visit the National Mall each year. It has seen—and continues to host—some of the nation’s largest rallies. It is also the site of many of Washington, D.C.’s major celebrations, including Presidential inaugural festivities, a spectacular Fourth of July fireworks show, and the annual Smithsonian Folklife Festival, held in late June/early July.

The Mall’s area encompasses the U.S. Capitol, Washington Monument,Lincoln Memorial, World War II Memorial, Korean War Veterans Memorial, and the Vietnam Memorial. Alongside, you’ll find entrances to ten different Smithsonian Institution museums. And, of course, it’s the perfect spot for jogging, Frisbee, or a picnic in the middle of a busy tourist day.

There’s not much shade on the Mall, so bring sunscreen and a hat. Check the National Park Service’s website beforehand; there are ranger-led talks and walking tours almost every day. If you’re traveling to Washington in the summer, check out the Mall’s annual “Screen on the Green” series — a weekly outdoor screening of classic movies from June through August. For more, visit: www.nps.gov/nama/index.htm or  www.nationalmall.org.