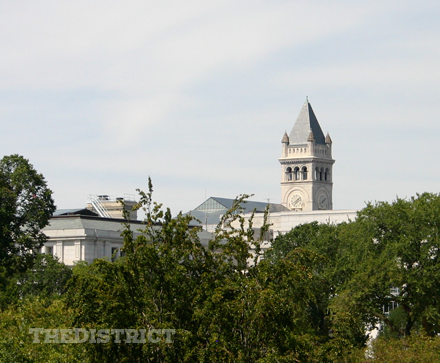 When the Old Post Office was completed in 1899, its ornate style of architecture was just falling out of vogue. It was designed to be the post office headquarters for both the District of Columbia and the United States as a whole, but within 15 years the Washington, D.C. mail depot moved to its own building, and there were calls for the “old” post office to be torn down. Only the Great Depression halted plans to raze the building and put up new federal offices. Plans for its destruction continued to be drawn up and debated until 1973, when it was added to the National Register of Historic Places. Congress appropriated money for an extensive overhaul, and by 1983 the building was beautifully restored.

Today the highlight of a visit to the Old Post Office is the view from the 315-foot Clock Tower, the third-highest building in Washington, D.C., offering the second-highest view of the city, bested only by the Washington Monument. The Clock Tower is home to the Congressional Bells, a bicentennial gift from Great Britain to the U.S. Congress. The bells were modeled after those found in Westminster Abbey, and sound every Thursday night as well as on certain special occasions. The glass elevator to the observation deck, maintained by the National Park Service, leaves every five minutes.

As for the rest of the building, the upper floors house the National Endowment for the Arts and the National Endowment for the Humanities, and the lower three floors are occupied by nearly two dozen shops and more than a dozen food stalls, all arranged around an expansive atrium called the Old Post Office Pavilion. That space also acts as a venue for many impressive events, including some past inaugural balls. Performers frequently fill the building with their music.

The Old Post Office’s food court is a favorite lunch spot for the many federal employees who work in that building and the several other federal offices surrounding it in Federal Triangle—meaning that its busiest hours by far are at midday during the week. For more information visit www.oldpostofficedc.com.