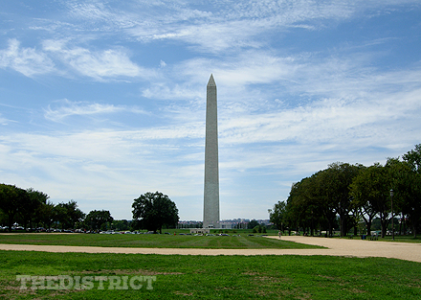 The following press release is from the National Park Service:

Public tours of the Monument on the day of the reopening, May 12, will begin at 1:00 p.m. The tickets will be available on a first come-first served basis starting at 8:30 a.m. that day at the Washington Monument Lodge, located on 15th Street, between Madison and Jefferson Drives. Tickets for tours on May 13 and all future dates will be available on the NPS reservation page, www.recreation.gov, starting on April 16, at 10 a.m.

“We are delighted to be in the homestretch with the repairs to the Washington Monument almost complete, and we look forward to the re-opening on May 12 so we can once again welcome visitors to this iconic monument to our nation’s first President,” said National Park Service Director Jonathan B. Jarvis. “We are grateful for David Rubenstein’s generous donation that funded half of the $15 million repair bill. David’s support of the national parks and the work of the National Park Service sets a high standard for park philanthropy nationwide and is appreciated by every visitor who will learn something about President Washington or simply enjoy the view from the top.”

“The National Park Service has done a spectacular job of repairing the monument, and I hope as many people as possible will soon be able to see the unique view from the top,” said philanthropist David M. Rubenstein.

Mr. Rubenstein donated $7.5 million to the monument’s restoration via the Trust for the National Mall, matching the public funds allocated by Congress.

“We are grateful for Mr. Rubenstein’s generosity and the National Park Service’s diligent work. Thanks to this successful public-private partnership, visitors can once again experience the full grandeur and history of the National Mall,” said Caroline Cunningham, president of the Trust for the National Mall.

Because of the closure of the Monument, the National Park Service will begin extended operating hours on May 12. The Monument will be open from 9a.m. until 10p.m. until the end of summer.

The Washington Monument has been closed since August 23, 2011, due to damage received in a 5.8 magnitude earthquake. It is now in the final stages of the restoration, which included repairs to more than 150 cracks in the structure.