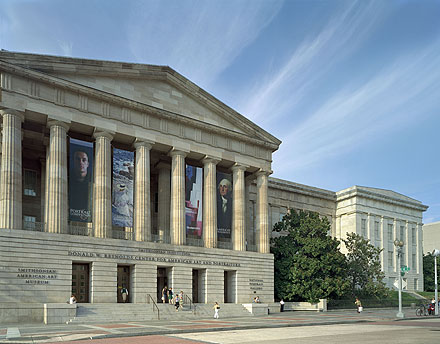 In America’s early, upstart days it may not have been much of a cultural powerhouse, but as it grew so did its importance in the art world, until by the 20th century it became arguably the world’s cultural capital. The Smithsonian American Art Museum traces that history with a collection that has been growing since 1829.

The museum works harder than most to make as much of its collection as possible visible to the public. A good portion of the top two floors, for example, are taken up by the Luce Foundation Center, which displays more than 3,300 objects in glass cases, with paintings hung tight together, sculptures on shelves, and miniatures and medals in drawers. You can even watch through floor to ceiling glass as conservation staff go about their work.

A similar ethic can be seen in the permanent exhibition on view in the Grand Salon of the Renwick Gallery, the museum’s branch building a few blocks away, where paintings from the 1840s to the 1930s are hung one above another and side by side.

Finally, the museum also collects American crafts and decorative arts, including lots of jewelry, studio furniture, and wood carvings. Many of these pieces are in the Luce Foundation Center, but most of them on display are in the Renwick Gallery.

The Smithsonian American Art Museum shares a building with the National Portrait Gallery, with floor space about evenly divided floor by floor. So if you find yourself looking at American history through the lens of portraiture, you’ve probably wandered into the other museum.

Nearby Attractions
Capital One Arena