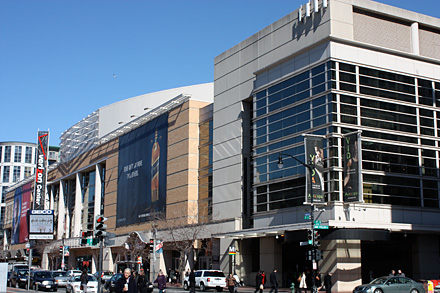 You’ve seen the monuments, been to the Capitol and walked around Georgetown. And now you’re foot-weary and ready to be entertained. The Capital One Arena (formerly the Verizon Center) might have your Washington, DC, ticket. It is Washington’s downtown sports and concert arena, within easy walking distance of numerous tourist attractions, and a Metro stop opens at the arena’s gates.

It is the home of the National Basketball Association’s Wizards. The Wizards may not be the best sports team in town, but it’s always fun going to a game.

The reverse is true for the Washington Capitals, whose roster includes Alex Ovechkin, a Russian who is one of the best players in the world. They seldom lose at home and the red-clad hometown fans whoop and holler at a fever pitch. And even if you don’t know the finer points of Canada’s favorite sport, enjoy the Zamboni as it resurfaces the ice between periods or grab favorite local food (zingy half smokes, anyone?) from one of the numerous food vendors on the wide concourses.

The arena seats more than 19,000 for basketball and the Georgetown Hoyas men’s team of the Big East conference often plays its home games to capacity crowds. You are not, however, on Georgetown’s campus. It is several miles way, overlooking the Potomac River, but students still flock to the games and the arena takes on a college atmosphere on winter nights.

The Washington Mystics of the Women’s National Basketball Association also play at Capital One Arena, in the spring through the summer.

But sports are only part of the attraction at Capital One Arena. It plays host to more than 100 concerts and other events each year. And with Washington being a world capital, the nation’s top entertainers regularly visit Capital One Arena, often for a show or two as part of their nationwide tours.

Ticket availability varies greatly, with some popular shows and big games for the Wizards, Capitals and Hoyas sold out. But that is certainly not always true and visitors can check at the box office (17 windows) at the arena at 601 F St., NW for availability. You can also buy tickets online at our Capital One Arena Tickets page.

Depending on how much in advance you arrive ahead of the starting time for a concert or sports event, crowds can be packed on nearby streets waiting to get inside. So arrive a bit early if you can, a half hour or more in advance. There’s plenty to eat inside, sometimes pricey, sometimes not, at concession stands along the arena’s concourses. Outside, there are a host of good restaurants within easy walking distance for a pre-game meal or a post-concert dinner.

For hotels near the Capital One Arena, click here.