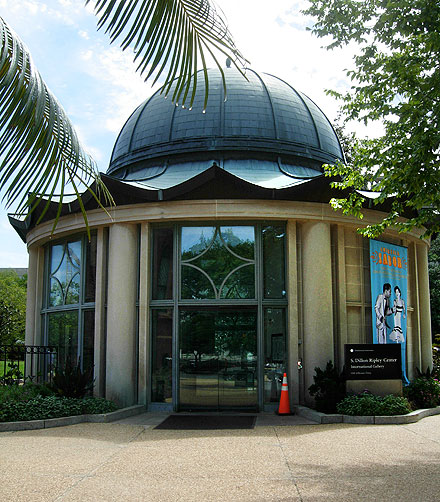 Strolling along Jefferson Drive from the Smithsonian Castle to the Freer, you pass a small, copper-domed pagoda you could easily dismiss as an information kiosk.

In fact, that small kiosk is merely the entrance to the much larger underground rooms of the S. Dillon Ripley Center, which houses the Smithsonian Institution’s International Gallery, the Smithsonian Associates, and perhaps best of all, the Discovery Theater.

The International Gallery hosts temporary exhibitions devoted, as you might imagine, to international topics. In the fall of 2011, for example, it held “American Sabor: Latinos in U.S. Popular Music,” which explored the roles of Latino musicians in five cities’ music scenes from the 1940s onward. It is also sometimes one of the first places the Smithsonian presents the shows in its Traveling Exhibition Service, as was the case in the spring of 2009, when “Jim Henson’s Fantastic World” launched. (The Traveling Exhibition Service’s offices are also in the Ripley Center.) In the spring of 2012, it is home to “MathAlive,” which examines the math behind everyday activities through 40 interactive games and exhibits.

The Smithsonian Associates program, meanwhile, gathers under one umbrella all of the Smithsonian Institution’s membership and educational offerings. These include lectures, films, discussions, art studios, origami workshops, and much more.

One of the most popular is the Discovery Theater, which has been delighting children for nearly 50 years. Most of the performances are educational—like WEE Speak! Spanish, Krazy Kitchen Science, or How Old Is a Hero?—though a few are just for fun. Every year, for the entire month of December the Theater stages Seasons of Light, which introduces kids to history and customs of Devali, Ramadan, Sankta Lucia, Chanukah, Kwanzaa, Las Posadas, Christmas, and the First Nations’ tradition of the Winter Solstice. Discovery Theater tickets are generally $6 or $10 for kids, $8 or $12 for adults.

Discovery Theater shows often sell out, so it’s a good idea to check the schedule and purchase tickets in advance through their website. The Ripley Center connects underground to the Sackler and Freer galleries, and the Freer is right next to the Smithsonian Metro station entrance, which is handy when it’s raining or very cold.