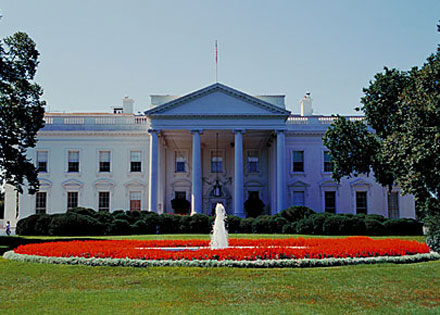 The White House may well be the most powerful and abiding symbol of American government. The building bears palpable witness to our country’s history.

Based on a design submitted by an immigrant and chosen by George Washington, only to be torched and looted by the British just fourteen years after its completion, the White House has been rebuilt, revised, renovated, and restored by Presidents and First Ladies from James Monroe to Jacqueline Kennedy.

Today, the White House stands six stories and spreads its 55,000 square feet over 132 rooms. The grounds also include a bowling alley, a tennis court, a putting green, a movie theatre, a jogging track, a basketball court, and a swimming pool. In the tradition cemented by Thomas Jefferson, the building has remained accessible to the public, and on average 5,000 visitors pass through the grounds every day, though since Mr. Jefferson’s days some restrictions have been necessary for the sake of security. Still, the Executive Office stands as a working testament to a system of government both chosen by and answerable to its people.

Self-guided tours of the White House are available for groups of ten or more people. Submit a request through your Member of Congress. Go to www.house.gov or www.senate.gov for information about contacting your Representative or Senator. If you’re not a citizen, you’ll need to go through your embassy in the District. These requests are accepted up to six months prior your visit.

It’s not a bad idea to plan ahead, as tours tend to book up well in advance. Concerning security: umbrellas, wallets, keys, and cell phones are explicitly permitted. Little else is.